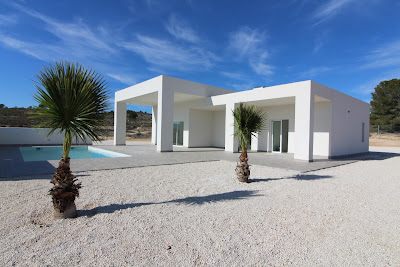 Las Colinas, Alicante - MedVilla Your Spanish Real Estate Agent with properties for sale in Pinoso and the Costa Blanca South are delighted to bring onto the market this New Build Villa in Pinoso, Alicante.Las Colinas is a select and exciting development of Luxury Villas with the choice of Four Different Styles and located in a Private Natural Park with fabulous amazingviews to the Mountains and Almond Orchards,yet walking distance to the local Hamlet and only 6 minutes drive to Pinoso.This is a truely spectacular location and must be seen first hand to appreciate the beauty of the location You have a choice of four different models to choose from and all come with the plot,electricity and water already connected.

A Show house of the Finca Modern is now availlable  - Became curious about this Pinoso Villas ? 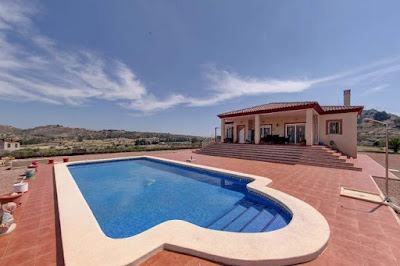 A West facing, three bedroom villa in Aspe, set in a beautifully landscaped 10,000 sqm plot surrounded by pure nature and mountains;This lovely villa is situated just a 5-minute drive to the historic town of Aspe town center where you can enjoy all amenities (bars, shops, restaurants...) and no more than 25 km to the Alicante beaches and airport.The villa all on one level is accessible via the imposing entrance terrace, the full width of the building directly overlooking the private pool 10 x 5 and the benefits of air conditioning, floor heating and comp increases: large living/dining room with 2 sets of sliding doors to the terrace; separate fitted kitchen with utility room; 3 bedrooms, master with access to the terrace; family bathroom with separate shower cabin; shower room.There is unlimited parking had along with lots of areas planted with palms and a wooden barn housing of the sauna.This villa is perfect for a family bragging space and quiet ideal for people who like to be entertained.

Come and have a look, you won't be disappointed - Became curious about this Aspe Villas ?

Feel relaxed with our expertise and service. We are MedVilla your dream home is our passion!


>>More Spanish properties for sale are listed at our main website www.MedVillaSpain.com

Plans to buy a property in Hondon Valley, Spain?

You will find an excellent choise of villas in Hondon, houses and apartments but also building plots on our website and this is the best way to begin your search to find your new dream property abroad.


Do you want to get in touch with our team?

Feel relaxed with our expertise and service. We are MedVilla Spain your Hondon dream home is our passion!

Why buy your Hondon property with MedVilla? Benefit from 15 years experience with a team of agents that speak your language and understand the rules and policies of the country where you want to buy your property.

A range of well kept properties located in Hondon valley, Spain or in the immediate area with a hones professional advice guarantee you to take the richt decision. Once you have found your favorite property you can count on us for your purchase, not only during the buying process, but also long after that we will assist you with advice where neessary.

Our MedVilla team wishes you much finding your favorite property in Hondon valley, Spain. We will welcome you to our office in Aspe, Spain for advise and to assist you with the viewing of the properties you selected in Hondon valley and surrounding areas.


>> Hondon properties are listed at www.MedVillaSpain.com

The city of Aspe is replacing much of the lighting of municipal sports facilities in the area of the pavilion and pool, changing the existing luminaires by others of the new LED technology. These actions, worth about 40,000 euros, are included in the 2016 Financially Sustainable Investment Plan that the city of Aspe is developing in various points of the population with the aim of saving energy.

According to the City Council, it will act in all exterior lighting of the municipal sports area, including tennis and paddle courts, as well as the summer pool. Also will replace all the luminaires of changing rooms, corridors, accesses and gymnasium of the Municipal Sports Pavilion and the Tomás Martínez Urios Swimming Pool.

Four hundred fluorescent tubes, about two hundred downlights and more than one hundred projectors, as well as thirteen outdoor lamps, will be placed among all the sports facilities. Reactors and primers and all necessary equipment for LED technology will also be replaced. In this way, you can save six to seven times on the bills generated by the replaced luminaires. In addition, the works have been awarded to the local company Electroasis, thus encouraging local employment.

You are free to copy share the work, distribute and transmit through any medium or format under the following conditions: The user must specify the creator of the work (MedVilla) and a full link to website www.medvillaspain.co.uk with the keywords "property for sale Spain".